Dozens of aerosol sunscreen products have tested positive for benzene, a dangerous cancer-causing chemical. Consumers who have used these products and now have cancer or serious blood disorders are filing lawsuits. 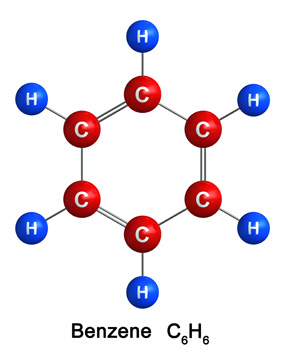 Benzene can be derived from natural gas, crude oil, or coal. It is extremely flammable and evaporates quickly when exposed to air.

What Is Benzene Used For?

Benzene is a widely used industrial chemical, and it is one of the 20 most widely used chemicals in the United States.

Benzene is most often used as a starting material to make other industrial chemicals that are then used to help make many different materials (especially plastics). There are many manufacturing processes that begin with benzene and finish with a completed material or product very different from benzene, such as resins, nylon, synthetic fibers, and polystyrene.

Benzene is also used as a solvent (a substance that dissolves or separates other substances) by the chemical and pharmaceutical industries. Benzene is used to make certain detergents, dyes, drugs, lubricants, rubber, explosives, and pesticides.

In the past, benzene was used even more commonly as an industrial solvent and gasoline additive. At the beginning of the twentieth century, benzene was widely used in various industries around the world, especially in printing and in the shoe manufacturing and rubber industries, but benzene is now used less frequently as people have recognized its dangers as a carcinogen. In 1963, Italy was one of the first countries to adopt a law banning the use of benzene as a solvent.

Benzene Is a Dangerous Chemical and a Known Carcinogen

Benzene is a dangerous chemical. Breathing benzene can cause dizziness, drowsiness, and unconsciousness. Long-term exposure to benzene causes cancer and other serious conditions.

Benzene is a carcinogen—a cancer-causing chemical. There is no doubt or debate among scientists and the agencies and entities that classify substances and chemicals.

The International Agency for Research on Cancer (IARC) is part of the World Health Organization (WHO). The IARC conducts and coordinates research into the causes of cancer. The IARC has classified benzene as carcinogenic for humans based on evidence that benzene causes acute myeloid leukemia (AML). IARC also recognizes that benzene exposure is linked to acute lymphocytic leukemia (ALL), chronic lymphocytic leukemia (CLL), multiple myeloma, and non-Hodgkin lymphoma.

The National Toxicology Program (NTP) is an inter-agency program run by the U.S. Department of Health and Human Services to coordinate, evaluate, and report and share toxicological information about potentially hazardous substances. The NTP is formed from parts of several U.S. government agencies, including the National Institutes of Health (NIH), the Centers for Disease Control and Prevention (CDC), and the Food and Drug Administration (FDA). The NTP has classified benzene as “known to be a human carcinogen.”

The U.S. Environmental Protection Agency (EPA) maintains the Integrated Risk Information System (IRIS), a database of information on the health effects on humans of exposure to various substances in the environment. The EPA classifies benzene as a known human carcinogen.

Benzene Levels in Products Are Regulated

The Occupational Safety and Health Administration (OSHA) is the government agency tasked with ensuring safe and healthful working conditions by setting and enforcing standards. OSHA limits exposure to benzene in most workplaces to an average of 1 ppm (part per million) in the air during a workday and a maximum of 5 ppm over any 15-minute period. If exposure could be higher, OSHA requires employers to provide protective equipment such as ventilators.

The EPA limits concentrations of benzene in drinking water to 5 ppb (that’s parts per billion, not million). Some states may have lower limits. The FDA also limits benzene in bottled water to 5 ppb.

The Consumer Product Safety Commission considers any product that contains 5 percent or more by weight of benzene to be a “hazardous substance” requiring special labeling.

The U.S. Food and Drug Administration (FDA) classifies benzene as a Class 1 solvent “that should not be employed in the manufacture of drug substances…. However, if their use is unavoidable in order to produce a drug product with a significant therapeutic advance, then their levels should be restricted.” For these particular situations, Benzene is restricted to 2 parts per million (ppm).

Of the samples Valisure found benzene in:

Again, benzene is not an approved ingredient in any sunscreen in any amount.

To make matters worse, benzene can be absorbed through the skin, and studies have found a significant increase in the benzene absorbed when that skin has been treated with sunscreen.

One research group working with scientists at Sorbonne University in Paris tested 16 sunscreens and uncovered evidence that links benzene contamination with a particular ingredient used in some sunscreens—octocrylene. Octocrylene is a chemical that, once absorbed into the skin, captures UV rays before they can damage the skin. The research indicated that octocrylene degrades in the sunscreen and is a likely source of the benzene contamination.

Sunscreens in which Valisure Found Benzene