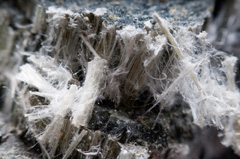 Asbestos is the name of a group minerals found in rock and soil in many areas of the world. Asbestos occurs as bundles of fibers that are useful because they are strong; are heat-, fire-, and chemical-resistant; and do not conduct electricity.

There are two main kinds of asbestos: chrysotile and amphibole. Chrysotile asbestos, the most common type used by industry, is also called white asbestos. Its fibers wrap around each other in a spiral and can be separated and woven. Amphibole asbestos fibers, on the other hand, are straight and more brittle. Both have been linked to cancer.

Asbestos fibers, when breathed in or swallowed, may cause serious health issues many years after the exposure. Asbestos-related diseases include:

Asbestos has been used in insulation since ancient times. Its heat- and fire-resistant properties must have been apparent in early Greek and Roman times, as it was used in clothing and building materials and to make flame-retardant cloth. Its use continued into modern times. It was very popular during the industrial revolution, which began in the late 1700s, and afterward. It began to be mined and used commercially in America in the late 1800s. It was used extensively in insulation materials in factories, schools, and homes; in the automotive industry; in shipbuilding; in construction; and in the textile, mining, and milling industries. In shipbuilding it was used to insulate pipes and boilers, for example; in building, to reinforce and strengthen cement and plastic as well as for insulation, sound proofing, and fireproofing and in roofing and in ceiling and floor tiles as well as in paints and adhesives; and in car manufacturing in brakes and clutch pads. It has even been found in crayons and some garden products.

The health problems of asbestos were actually known at least as long ago as early Roman times when Pliny the Elder observed that workers who worked with asbestos experienced many health issues. And he suggested making a respiration device from pig bladders for asbestos miners, which indicates early Romans were aware of asbestos’ effect on lungs. There are other examples from more recent history, too, of asbestos being cited as causing health problems. And there is also evidence that asbestos manufacturers knew of the health issues in the 1940s and 50s, but chose to conceal that information.

It was not until the 1970s that the Environmental Protection Agency (EPA), Occupational Safety and Health Administration (OSHA), and other U.S. agencies began to regulate asbestos in America. In 1971, OSHA implemented some guidelines and regulations concerning asbestos exposure in the workplace. In 1972, the Association Advancing Occupational and Environmental Health (ACGIH) listed asbestos as a human carcinogen. Throughout the 1970s, the EPA introduced some new rules and regulations regarding the use of asbestos, and in late 1977, the U.S. Consumer Product Safety Commission (CPSC) banned asbestos use in wall-patching compounds and in artificial fireplace embers, because those uses could introduce asbestos into the surrounding area. In 1979, hairdryer manufacturers stopped using asbestos in their products voluntarily. But it was not until 1989 that the EPA banned all new uses of asbestos, but even that, by definition, excluded preexisting uses. At the same time, the EPA established regulations requiring inspections of schools for asbestos hazards, such as damaged asbestos.

In spite of the fact that asbestos is not banned in the United States, since regulations began to be introduced in the 1970s, its use has dropped dramatically. Whereas in 1973, asbestos consumption in the U.S. was estimated at about 803,000 metric tons, by 2015 it was only about 360 metric tons. But so much damage had already been done and much asbestos remains, to this day, in many buildings and locations and products.

How Do People Get Exposed to Asbestos?

Asbestos exists in many places, and it was even more prevalent years ago. When asbestos was used extensively, before the health risks had been made public and regulations put in place to warn and protect people, working with asbestos products, such as cars’ brake linings, insulation, wall and ceiling tiles, and pipe insulation products, would release asbestos fibers into the air, resulting in the workers inhaling and/or swallowing them. In addition, the asbestos dust and fibers could stick on the workers’ clothing, so when they went home, their families were exposed, too.

In homes as well as businesses, when ceiling, floor, or roofing tiles made with asbestos were disturbed—by drilling or being pulled down for replacement or simply through being worn down over time—asbestos fibers released into the air to be swallowed or inhaled. Asbestos can get in water when cement pipes reinforced with asbestos corrode. In the aftermath of 9/11, the rescue workers were surrounded by, and therefore breathing, clouds of asbestos fibers that had been released into the air.

Even today, with asbestos regulated and health risks known, exposure is not uncommon. According to the Agency for Toxic Substances & Disease Registry, the most common occupational exposures in the U.S. today happen during repair, renovation, removal, or maintenance of older asbestos-containing products such as drywall, tiles, ceilings, etc. The most at-risk trades are construction, plumbers, electricians, and shipbuilders. Veterans are also on a short-list of occupations that experienced increased exposure due to asbestos use in ships, among other factors. In addition, homes that contain insulation made before 1990 or building materials produced before 1975 before asbestos was banned for fireproofing may contain asbestos-containing products that are eroding, and therefore leaching asbestos fibers into the air to be breathed and swallowed. And, of course, any disturbance of these products—for renovating, or removal, or replacement, or repair—will certainly release those same fibers. That is why you may have seen a tent around a building being renovated or repaired and the workers renovating it wearing special clothing and masks—they would be following OSHA regulations to protect themselves and the environment from the asbestos fibers being released as a result of their work.

In addition, talc, the softest mineral on Earth, used to make talcum powder, often forms side by side with asbestos in the earth. Therefore, when a vein of talc that is adjacent to asbestos is mined, some talcum powders it is used in may contain asbestos and therefore could be linked to a user developing mesothelioma or ovarian cancer.