Numerous studies have found connections between exposure to the herbicide paraquat and the onset of Parkinson’s disease and, as a result, people are filing paraquat lawsuits against the manufacturers. The estimates of the risk vary from study to study and report to report.

According to the Michael J. Fox Foundation for Parkinson’s Research, people exposed to paraquat at a young age have a 200 to 600 percent increased risk of developing Parkinson’s.

A study reported in the journal Environmental Health Perspectives in 2011 found that study participants with Parkinson’s disease were 2.5 times more likely to have used paraquat or rotenone (another herbicide) than those without Parkinson’s.

The New York Times reported that paraquat exposure could increase an individual’s risk of developing Parkinson’s disease by 150 percent. 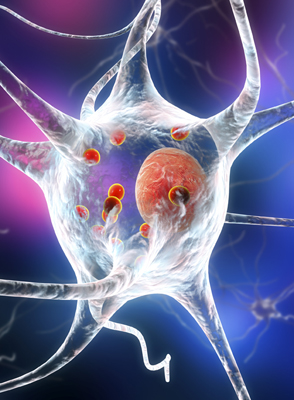 Neuron with Lewy bodies (the small red spheres), which are deposits of proteins accumulated in brain cells that cause their progressive degeneration.

Individuals exposed to paraquat who have developed Parkinson’s disease may be eligible to file a lawsuit against the manufacturer.

Does Paraquat Cause Parkinson’s Disease?

Exposure to paraquat has been shown to be associated with a greater risk of developing Parkinson’s disease—not to cause it. Just as everyone who smokes cigarettes does not develop lung cancer, but the evidence is irrefutable that people who smoke or smoked cigarettes are at a much greater risk of getting lung cancer than those who never smoked.

Scientists believe that both genetics and environment play a role in the development Parkinson’s disease. A study in California of more than 17,000 identical and fraternal twin brothers indicated that environmental factors actually outweighed genetics as a cause of Parkinson’s.

Paraquat has been banned in 32 countries, but not in the United States. In fact, the use of paraquat on crops in the U.S. has doubled in the past 10 years. But paraquat and TCE, another problematic chemical used in industry and some products, were banned in the Netherlands years ago and the incidence of Parkinson’s in the Netherlands has declined since.

The bottom line is that, while the specific numbers differ, there is quite a bit of evidence that exposure to paraquat—a highly toxic herbicide—may cause the onset of or accelerate the development of Parkinson’s disease. And the longer the exposure, the greater the risk. The studies also indicate there may be a time lag between first exposure and when symptoms develop.

What is Parkinson’s Disease?

Parkinson’s disease (PD) is a neurological illness that affects the nervous system. Cells in the nervous system degenerate and break down. This causes the movement disorder seen in Parkinson’s patients. While the cause (or causes) of Parkinson’s remains unknown, experts believe that genetic changes and exposure to environmental factors such as toxins play a central role.

Symptoms of Parkinson’s disease develop gradually. Early signs of the disease may include:

These movement issues may only affect one side of the body early in the disease before moving to the other side as well.

Other common symptoms of Parkinson’s disease are:

Over time, dementia, delusions, and hallucinations may develop.

Other conditions can produce these same symptoms, so people experiencing those symptoms need expert medical advice and evaluation. And there is no test for Parkinson’s, so it can be difficult to diagnose, especially in its early stages.

As noted, PD is a progressive disease. It worsens over time. Experts tell us there are five stages of Parkinson’s disease:

There is no known cure for Parkinson’s disease yet, and treatment varies by patient, because only the symptoms can be treated. Treatments include medication, surgery, physical therapy, and lifestyle changes, such as getting more rest and exercising.

Medications used for PD only treat and reduce the severity of the symptoms. They do not reverse the effects of the disease. People with Parkinson’s usually take a variety of medications to manage their symptoms.