What is the difference between civil and criminal law?

The term “civil law” first originated with the Roman Republic (753 – 31 BCE) which developed a legal code known as the jus civile (civil law). Based on customs and legislation, the jus civile applied exclusively to Roman citizens. It was the law of the privileged. The Roman Republic also developed another massive and more flexible body of law known as the jus gentium (law of nations) which evolved from decisions by magistrates in legal disputes involving foreigners. Roman law served as the foundation for the legal systems of many European countries, and some of its terminology has survived to the present.

Today the term “civil law” is sometimes used as a generic term describing all non-criminal law. But more precisely, the civil law governs private rights; it regulates the relationships and disputes between individual members of society (people, companies, or other legal entities). For example, the laws governing personal injury, property damage, contracts and property rights fall within the civil law. Other prominent bodies of law include admiralty law (the law of the seas), international law, military law, and canon (church) law.

Criminal law, by contrast, governs the relationship between individuals and the government (representing the community). So, while a civil case is generally a dispute between private persons or entities, the government brings criminal prosecutions to enforce the criminal law and determine whether and how to punish those who violate the law. 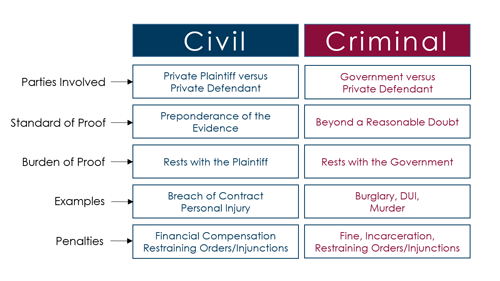